April 2021; Listen to our new podcast together with Sara Ottosson; Episode 5: Women in Finance Talk – More needs to be done to attract and attain female talent

December 2020; I was awarded the title ’Docent’ in Financial Economics by the Stockholm School of Economics.

2019: Our paper: ”The Labor Market Effects of Credit Market Information” in the Review of Financial Studies, received the Michael J.Brennan Best Paper Award at the SFS Cavalcade.

April 15/16, 2021: I will discuss the paper ”Dynamic Inconsistent Risky Choice: Evidence from the Lab and the Field” at the CEPR European Workshop on Household Finance

May 18, 2021: I will present at the 2021 Boulder Summer Conference on Consumer Financial Decision Making,  our paper: ”Are We Overdiagnosing Mental Illness? Evidence from Randomly Assigned Doctors” Coauthors Andrew Hertzberg and Andres Liberman

”The Price of Love” Coauthors: Jenny Säve-Söderbergh and Wenli Li

The project aims to analyze the financial consequences of the interaction between labor market participation, family formation, income, and savings over the lifecycle, exploiting differences between cohorts and marital status in the possibility to share their pension savings with one’s spouse pre- and post-death. 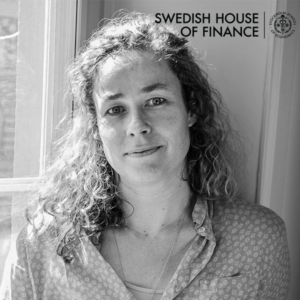 ♦︎ MARIEKE BOS
Economist (Docent) and Deputy Director, the Swedish House of Finance at the Stockholm School of Economics.